More than 400 businesses across Yorkshire and the Humber have pledged their support for the military by signing the Armed Forces Covenant. Are you going to join them?

It takes just five minutes to do and you can sign up straightaway if you wish by clicking on the button below.

What is the Armed Forces Covenant?

The Armed Forces Covenant is the nation’s commitment to treat fairly and respectfully those who serve or who have served in the armed forces, and their families.

Its purpose is to ensure members of the armed forces community have the same access to government and commercial services and products as any other citizen.

It covers a wide range of areas, including:

Who can get involved?

All sorts of organisations sign up to the Armed Forces Covenant. What they have in common is their wish to support service leavers and veterans, serving military, including reserves, cadet force adult volunteers, and their families.

Across Yorkshire and the Humber, more than 400 organisations have pledged their commitment in this way – ranging from micro businesses such as the Yorkshire Dales Distillery producing artisan gin in rural North Yorkshire to major logistics and distribution company, Leeds-based Clipper Logistics.

There are lots of reasons why organisations sign up. Here are FIVE popular reasons:

Where do I go for help? 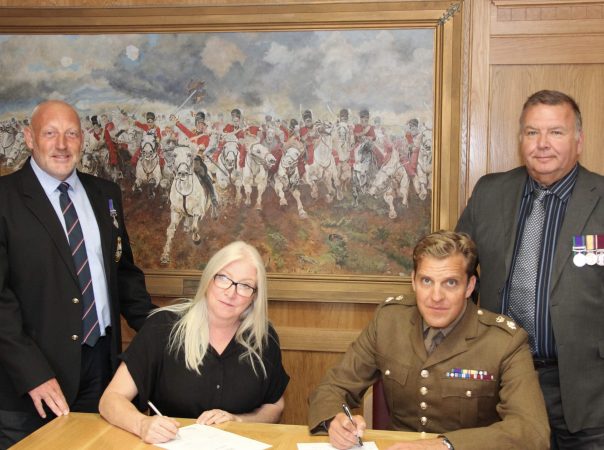 Headquartered in Leeds, Clipper Logistics is one of the largest companies in Yorkshire and the Humber to pledge its commitment to Britain’s military by signing the Armed Forces Covenant. Deputy chief executive Emma Demsey, left, was joined by Colonel Julian Salusbury, to sign the document under which the firm commits to treating the military community fairly.

The Armed Forces Covenant is a promise by the nation ensuring that those who serve or who have served in the armed forces, and their families, are treated fairly.

Find out more about the covenant

This website uses cookies to improve your experience while you navigate through the website. The cookies that are categorised as necessary are stored on your browser as they are essential for the working of basic functionalities of the website. We also use third-party cookies that help us analyse and understand how you use this website. These cookies will be stored in your browser only with your consent. You also have the option to opt-out of these cookies.
Necessary Always Enabled

Some cookies are essential for you to be able to experience the full functionality of our site. For example, they allow us to maintain user sessions and prevent security threats. They do not collect or store any personal information.

These are the cookies that help certain non-essential functionalities on our website. For example, analytics tools to measure how you use the website so we can improve it based on user needs. This could include anonymous information of how you got to the site, the pages you visit and how long you spend on each page.